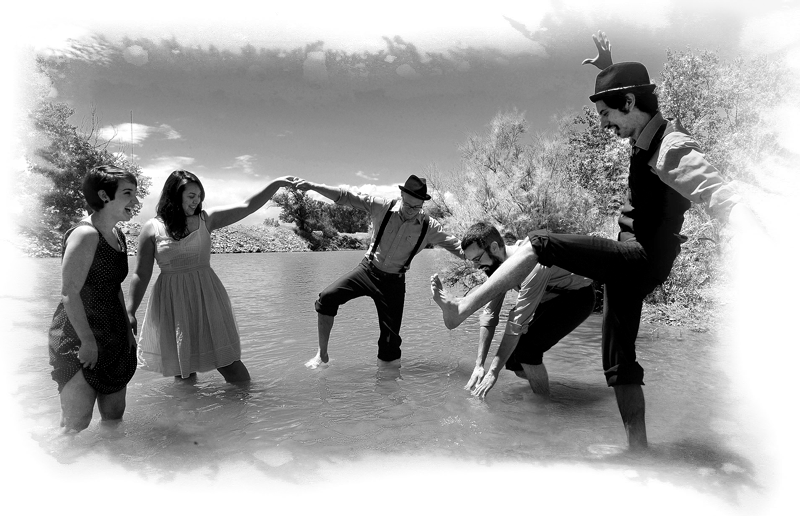 There are times, late at night, when the burnt sienna pigments cut adrift from old jugs of corn liquor take to the wind.  Their warm summons trip the unwary as easily as they ferry the willing.  So it was, on such a night, at some abandoned roadhouse, that five sylvan avowed to form a band. Aglow from the dregs of moonshine shared betwixt, they drank a toast to the irony of their new appellation: The Haunted Windchimes.

No doubt, the willing vessels that today carry The Haunted Windchimes have moments when they look into each other’s eyes and catch flashes of that warm night so long ago. Chela Lujan (banjo), Inaiah Lujan (guitar), Desirae Garcia (ukulele), Mike Clark (monster vocals, harmonica, guitar and mandolin) and Sean Fanning (upright bass) are the corporeal manifestation of The Haunted Windchimes. Their latest album, Out With the Crow, reflects a barrel-aged maturation that punctuates their moonshine roots. The album and the band’s public performances make clear that The Haunted Windchimes aim to rekindle the flames of Americana music for generations to come.

At a recent house concert in Louisville, Colorado, The Haunted Windchimes spun out three delicious hours of acoustic yarn from Out With the Crow and their earlier works.  Earth-shaking originals such as Mike Clark’s “Bound to Break” and the delicate “Little Box” poured from the band as easily as their elysian rendition of Lead Belly’s “Take This Hammer”.  Without pretense or affectation, they had the crowd smiling and swaying from opening chord to final bow. The gallery’s whispers between songs carried a common encomium: “amazing”, “wonderful”, “so talented” and “completely original”.  By the end of the evening, The Haunted Windchimes had wooed their audience into a warm reverie, the slightest hint of corn liquor kissing the night air.

The video below demonstrates the raw, powerful mood that is the hallmark of many of the band’s songs when fronted by Inaiah Lujan or Mike Clark.

The next video reflects the rich vocal stylings and tight harmonies that keep the crowd enraptured during their live performances.

It’s never easy to predict the life of a band, but it’s fair to say that The Haunted Windchimes have already left an indelible mark on the fabric of Americana.  Who knows, the road ahead may lead the band back to that dusty roadhouse of their roots.  Perhaps they take their rest there every night.